As you go… roads under your feet, towards the new future

Rockbund Art Museum (RAM) is delighted to be partner cell upon invitation by Biljana Ciric in "As you go… roads under your feet, towards the new future", a research project the independent curator has conceived and initiated to unfold over a period of three years. "As you go…" centers around the unheard voices and raising awareness to the shared problems underlying different contexts, ranging from China to Balkan, from Ethiopia to Central Asia. Through building a collective knowledge platform organized around the principals of ‘organic cells’ of the research — the collaborations with span from individuals and small-scale organizations to state-run and private museums — which together will form a close-knit atmosphere to engage in an entirely novel form of collaboration.

In June 2020, the RAM team launched the research project CURTAIN. Going beyond the limited time frame of a single project or geography, the initiative looks to unfold through an inter-connected series of commissions and collaborations in order to expand the connection between the museum with artists, scholars, critics and practitioners from diverse multicultural and interdisciplinary backgrounds. Through the development of CURTAIN, the museum has become increasingly in contact and intertwined with the project "As you go... roads under your feet, towards the new future". Through taking part in the research and providing support, we attempt to create an alternative method for institutions to co-operate with other partners to challenge the traditional hierarchies of artistic production, whilst also encouraging a creative dynamic to unfold that circumnavigates the conventional barriers of cultural production and interdisciplinary research.

New commissions will play a central part in the development of CURTAIN and will serve as a method of support for a growing list of collaborators gathered under this long-term project. With the purpose of enabling vital practices to continue playing a crucial role in the ecosystem of culture and contemporary art, the commissions will allow for new ideas and directions to come into fruition, as well as the reproduction of contributions through various media, enabling discussions and interactions among different practitioners. Through "As you go... roads under your feet, towards the new future", RAM has forged closer relationships with partners cells but also with a number of project participants representing various fields: Jasphy Zheng (artist, China), Robel Temesgen (artist, Ethiopia), Berhanu (anthropologist, China), Astrobus-Ethiopia (science-art-technology-innovation project, Ethiopia), and Marija Glavaš (culturology researcher, Slovenia).

Through immersive installations, unannounced performances, sculptural objects and artist’s books, Jasphy Zheng, an interdisciplinary artist who lives between Brooklyn, US, and China, constructs and realizes scenarios of public intervention that aim to raise awareness of our social and cultural environment in and out of the context of contemporary art.

"Stories from the Room" (2020) is her ongoing project that calls for personal writings from around the world, in order to build an archive for the presently difficult time that we share. Submitted writings will be saved in the archive as physical copies, and each contributor will be given a dedicated folder for recurring contributions. The archives will be on display at Rockbund Art Museum starting from November, 2020.

Special thanks to the Longlati Foundation for the support of "Stories from the Room" (2020).

Robel Temesgen is an artist practicing painting that encompasses elements of performance, installation, video and collaborative projects. Through reimagining local artifacts and cultures, such as “Nu Bunna Tetu” coffee pots and protective adbar spirits, Temesgen connects people, both local and “strangers” who constitute part of his continued interest in the socio-political dynamics of the social, sociality, and sociability.

In 2020, Temesgen launched a newspaper with a focus on recent events in Ethiopia. Through images and text, Temesgen redefines and contextualizes tools, materials, incidents, and entities that have become involved in the recent violence, protests and unrest. This project can be seen as a record of this specific time - a recollection of personal and collective engagement.

Berhanu is an anthropologist in African Studies with research interests in urbanization, migration, mobility and pastoralism, as well as post-socialist development and cross-cultural encounters.

In his participation in As you go…, Berhanu is taking part in the Addis Ababa River project in collaboration with two other Ethiopian researchers, Aziza Abdul Fetah and Sinkneh Eshetu. The aim of this research is to study the impact of the river restoration project on the socioeconomic lives of riparians. The project raises questions with regard to development, urban renewal and eviction, and perhaps a restriction of the urban stratum in relation to space.

Astrobus-Ethiopia is a mobile science-art-innovation outreach program that is carried out by driving a vehicle from place to place in different locations in Ethiopia. The project combines activities in Science, in particular Astronomy, Art, and Innovation to inspire students and the general public about the scientific method and its impact in the modern world.

The leader of Astrobus-Ethiopia,Yabebal Tadesse Fantaye, is a cosmologist turned data scientist whose research focuses on using artificial intelligence to map satellite images of the Earth, in order to find alternative ways to monitor the progress of African development. In 2020, Dr. Fantaye initiated a project that studies the impact of COVID-19 on the socio-economic status of the population in Addis Ababa, through analyzing comprehensive data related to mental health, economic stability, and domestic violence, obtained from drone surveillance and large-scale surveys. 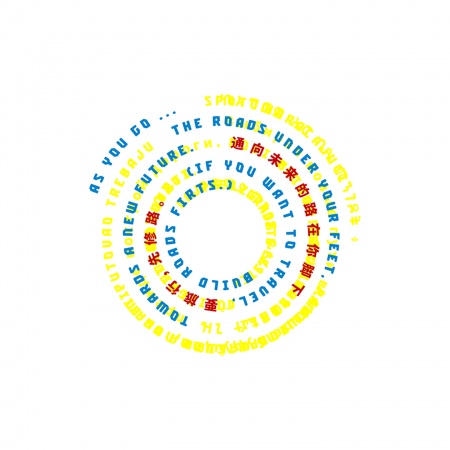 About As you go… roads under your feet, towards the new future

As you go... roads under your feet, towards the new future is a three-year project and research inquiry, conceived and initiated by Biljana Ciric in 2019, following curatorial research conducted in East Africa, Central Asia, and several Balkan countries where the project is situated.

Will we be able to decolonize our anthropological gaze from looking at the “other” from a distance, and turn the object of study into something we can engage with, in times when language differences spark fear, when discrimination makes us strangers towards each other?

Research is structured through set of established commonalities and they include socialism, non-aligned. The configuration of cells through long-term engagement seeks to emphasize different knowledge structures through collaboration, not only with artists but also architects, writers, anthropologists, and activists who are undertaking research within the project.

The first stage of the project began in February 2020, with a meeting of collaborating partners in Addis Ababa as well as the first public presentation.

BILJANA CIRIC is an independent curator.

She was the co-curator of the 3rd Ural Industrial Biennale for Contemporary Art (Yekaterinburg, 2015), curator in residency at Kadist Art Foundation (Paris, 2015), and a research fellow at Henie Onstad Kunstsenter (Høvikodden, 2016). Her recent exhibitions include "An Inquiry: Modes of Encounter" presented by Times Museum, Guangzhou (2019); "When the Other Meets the Other Other" presented by Cultural Center Belgrade (2017); "Proposals for Surrender" presented by McAM in Shanghai (2016/2017); and "This exhibition Will Tell You Everything About FY Art Foundations" in FY Art Foundation space in Shenzhen (2017).

In 2013, Ciric initiated the seminar platform From a History of Exhibitions Towards a Future of Exhibition Making with focus on China and Southeast Asia. The assembly platform was hosted by St Paul St Gallery, AUT, New Zealand (2013), Rockbund Art Museum, Shanghai (2018), Times Museum, Guangzhou (2019). The book with the same name was published by Sternberg Press in 2019. Her research on artists organized exhibitions in Shanghai was published in the book History in Making; Shanghai: 1979-2006 published by CFCCA; and Life and Deaths of Institutional Critique, co-edited by Nikita Yingqian Cai and published by Black Dog Publishing, among others.

In 2018 she established the educational platform “What Could/Should Curating Do?”. She was nominated for the ICI Independent Vision Curatorial Award (2012). Currently she is developing a long-term project titled "As you go . . . the roads under your feet, towards a new future". She is undertaking practice based PhD in Curatorial Practice at Monash University, Melbourne.

Launched in 2020, CURTAIN is a long-term research project which will be articulated through a series of exhibition formats, discursive platforms and cross-institutional collaborations spanning a three-year period. Seeking to go beyond the fixed definition of an exhibition, the project looks to expand the dialogue with artists through forging connections with critical thinkers and practitioners from other social and cultural fields.

The concept of CURTAIN retains manifold meanings and forms of engagement with the public. A curtain can be both a material and immaterial device shimmering between various stages and ways of gather around a collective performance. Rather than presenting a solitary project fixed to only one time frame and geography, we at RAM seek to unfold this CURTAIN through an inter-connected series of commissions and collaborations that will propel us into new fields of inquiry. This long-term framework enables us to sustain experiences and conversations across different spaces, to disrupt our usual habits of consuming visual culture, and to build awareness and critical knowledge together.

Between 2020 to 2023, CURTAIN will comprise a series of exhibitions, publications, seminars and other discursive events, artist commissions, representing an ongoing partnership with institutions around the world. In conjunction with these activities, Rockbund Art Museum has also launched a CURTAIN online platform to move beyond physical limitations and boundaries. You can find out more about the CURTAIN project here:
http://www.rockbundartmuseum.org/en/research/detail/6d5cxBr 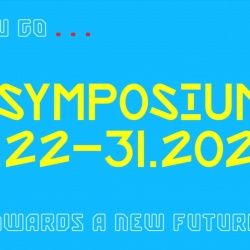 "As you go…roads under your feet, towards the new future" International Symposium / Live Stream