Convergences: Summoning Creativity in Shanghai A Series of Conversations

Convergences, the second series of conversations on urban creativity initiated by Francesca Tarocco and Anna Greenspan in collaboration with Rockbund Art Museum and NYU Shanghai, sees internationally renowned thinkers and practitioners explore, remap and reimagine the temporal and spatial landscape of the city.

Convergences stages a set of encounters in space and time, bringing international scholars and practitioners to engage with the local particularities of contemporary Shanghai culture. In particular, the series is interested in how rituals of the everyday connect, collide and converge with art, film and new media.

In the first of the conversations,  Angela Zito, associate professor of anthropology and religious studies and co-director of the Center for Religion and Media at New York University. Professor Zito will be present at the screening of her acclaimed film Writing in Water and explore questions related to urban ethnography. In the second conversation Professor Marita Sturken of the Department of Department of Media, Culture, and Communication, will present her work that investigates visual culture, cultural memory, and national identity.

The series is hosted Dr. Anna Greenspan and Dr. Francesca Tarocco of NYU Shanghai, who are founders of the Shanghai Studies Society research initiative. 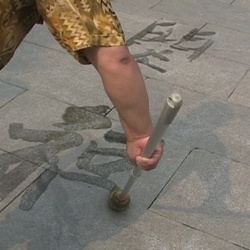 Convergences: Summoning Creativity in Shanghai - A Series of Conversations Episode 1