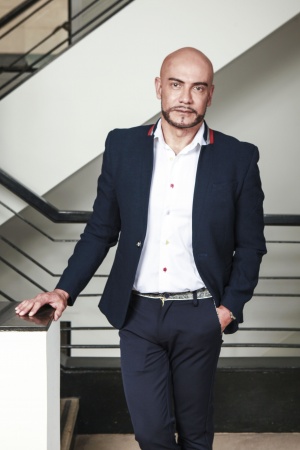 Post-gratuated in Art History, Larys Frogier was also a researcher at the Archives for Art Criticism (Rennes) and at the École des Hautes Études en Sciences Sociales (EHESS Paris).

For many years, he has taught contemporary art history and curatorial studies in different academies.

From 2000 to 2010, he was the Director of the contemporary art centre La Criée France.

In 2010-2011, he has been selected by the British Council as Cultural Leader inside their “Cultural Leadership International” program.

In 2011, he made successful the funding for Culture from the European Commission for conceiving and unfolding the researches, residencies, exhibitions programs  Art Cooperation Transmission (A.C.T.)  Democ(k)racy in Belgrade (Serbia), Eindhoven (Netherlands),  Rennes (France), Cluj-Napoca (Romania).

He has been the Director of Rockbund Art Museum (RAM) in Shanghai since 2012.

Since 2013, he has been the Chair of the HUGO BOSS ASIA ART jury and he conceived this new award, exhibition and research program as an evolving platform to question Asia as a construction to investigate rather than a monolithic area or fixed identities.

In 2020, he engaged Rockbund Art Museum in the long term research program conceived by the independent curator Biljana Ciric As you go... roads under your feet, towards a new future.

In 2020, with Alfie Chua, he founded the duo artists Ocean & Wavz engaged in text, sound and image creation.