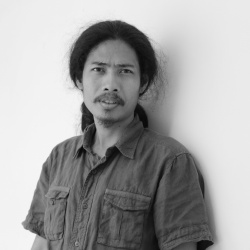 Inspired by photojournalism’s roots in bearing witness and its activist vein, Rattana is a trained photographer in challenging conditions in his home country, documenting natural and manmade disasters. He also experiments with photographic abstraction and makes use of medium of video. The project of recording and preserving is especially poignant in Cambodia, which lost significant historical archives during the violent cultural cleansing campaign implemented by the communist Khmer Rouge regime (1975–79). Rattana operates in a context in which the act of remembrance is a form of subversion.

Rattana’s photographs do not merely communicate a state of victimhood; rather, they acknowledge the processes of survival, resilience, and healing. They present a specific perspective on modernity, one in which advanced technology equates to destruction, the recovery of nature is a form of progress, traditional and vernacular forms sometimes trump innovation, and the everyday becomes heroic.