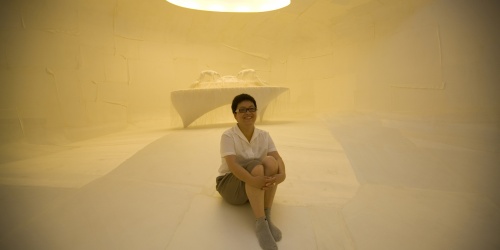 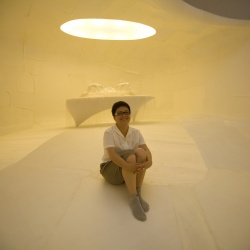 Lin Tianmiao was born in 1961 in Taiyuan, China. She now lives and works in Beijing, China.

Lin Tianmiao studied in the Fine Art department of Capital Normal University, Beijing in 1984. She then went to the US in 1988. After graduating from the Art Students League in New York in 1989, she worked as a designer in New York for almost seven years. In 1995, Lin Tianmiao returned to China from New York.  Presenting The Temptation of St. Teresa, The Proliferation of Thread Winding, Pants, Trees, among others in an open studio, she thus laid out the important positions of her engagement in experimental art; during the same time, she became known as one of the first Chinese female artists to gain international recognition. During the 1990s, when “apartment art” was a phenomenon in Beijing and Shanghai, Lin gained a great deal of experience. Lin’s early works are known for her practice of thread-winding where she binds the material—usually silk, hair, cotton, or felt—tightly around found and manufactured objects. Initially tasked by her mother to spool cotton as a young girl, Lin later reclaimed this act. Lin’s work studies her own social role and the relationship between identity and social context, questioning women’s identity. In 1998, Lin and Wang Gongxin created the Loft Media Center. She had done everything from infrastructure and interior decoration to design, supervision, equipment management, organization, etc. It laid the foundation for holding hundreds of cultural events in the future. In 2012, the Asia Society Museum in New York presented Bound Unbound, the artist’s first major solo museum exhibition in the U.S.

She has participated in the Istanbul Biennale, Turkey (1997); the Shanghai Biennale, China (2002); the Ireland Biennale (2002); the Gwangju Biennale, South Korea (2002, 2004); and the Setouchi Triennale, Japan (2016). In 2015, Lin had a solo show as a farewell for feminine themes entitled “1.62M” which was held in HOW Art Museum. In recent years, Lin has come out of the predicament of feminism, and has created large-scale installations, sculptures, photography, videos and various other media practices with an open mind.