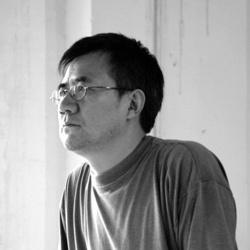 Xiao Kaiyu was born in 1960 in Zhongjiang, Sichuan, China. He was formally trained in traditional Chinese medicine, and worked as a doctor in Zhongjiang from 1980-1986. His poetry was first published in literary journals in the mid-1980’s and within a few years he won The Avant-Garde Poetry Award (1988). In 1989, he founded two underground poetry magazines The Nineties and against. Since then he has also founded the journals of talk and chat, Northern and Southern and Commentaries of Chinese Poetry. He has been a member of the Liu Linan Poetry Award jury since 1995. Three collections of poetry, Wild Pleasures at the Zoo, The Sweetness of Learning and Poems from Xiao Kaiyu were published in 1997, 2000 and 2004 respectively, in Beijing. Im Regen geschrieben was published in 2003, Frauenfeld. Xiao Kaiyu’s Works will be published this year, 2007, in Kaifeng. In 1997 he moved to Berlin. In 2005 he went back to Shanghai and now works as a Chinese literature professor in He Nan University, Kaifeng.

Xiao is considered a ‘narrative’ poet, like Sun Wenbo and others whose work caught on in the 1990s, first in the samizdat circuit, later also in regular publications. Xiao has also made his name as a critic. He says the principal question is what one writes rather than how one writes it, thus firmly distancing himself from the metaphorists and the language-squeezers. What one writes: experienceable and experienced reality, socially and morally committed. Thus in content his poetic creed has much in common with classical Chinese poetry - from which it differs in the form of his poems, which is mostly free verse. However, Xiao’s work may have its roots in a recognizable world, but no more than classical Chinese poetry is it a simple reflection of that world. And apart from the ‘narrative’, there is a lyrical Xiao Kaiyu, in a short poem like ‘Ahh, Mist’, and an imaginative one, in ‘Northern Station’, who feels himself ‘a crowd of people’: ‘I sense there’s another pair of feet in mine’. Xiao Kaiyu is a versatile poet. His work has been translated into German, English, Italian and Dutch.