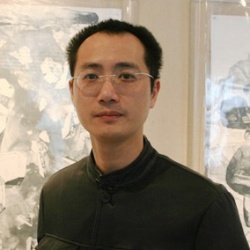 Born in 1969 in Zhangzhou, Fujian province, Qiu Zhijie graduated from the printmaking department at the China Academy of Art. He is now assistant professor of Inter-Media Arts as well as assistant director of the Research Center of Visual Culture at the China Academy of Art, and also artistic director of the 25000 Cultural Transmission Center. He currently lives in Beijing and Hangzhou.

In the early 1990s, Qiu Zhijie became known in the field of contemporary Chinese art with his large-scale installation works fusing painting, installation and ad-hoc art. “Copying Wang Xizhi's ‘Orchid Pavilion Preface’ One Thousand Times”, which reflects on the dialogue between performance art and Chinese calligraphy, is another emblematic and influential work. Qiu is furthermore one of the earliest artists to explore the new field of conceptual photography. He uses a large spectrum of media such as painting, photography, installation, video, and performance art for his often eclectic yet always original works. His subjects are as varied as the techniques he uses, and his works encompass Chinese parapsychology as well as the “literati spirit". Qiu is also very influential as a theoretical writer and curator.