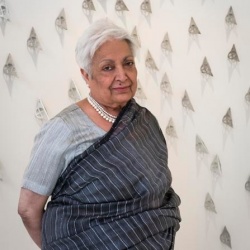 Zarina Hashmi is an Indian engraver and sculptor. She was born in Aligarh, India, in 1937. She received a degree in mathematics, and had originally planned to train as an architect. Instead she explored woodblock printing in Bangkok and Tokyo and further studied intaglio in Paris. As she married a diplomat in 1958, she spent several years living in foreign countries including Thailand, France, and Germany. In 1975, Zarina moved to the United States, settling first in Los Angeles and then in New York City where she has lived ever since. Hashmi's interest in architecture and geometry is visible in her work. Her prints, woven objects and paper works often show an architectural cartography, oscillating between the global and the local, between actual or remembered spaces. Her mother tongue Urdu, the feeling of loss and the traces of nomadism are other constants in her creation. “Home is a Foreign Place” (1999), composed of 36 engravings of architectural spaces and traces of emotional and remembered ones, commented with writings in Urdu. Her emigration to New York in the 1970s brought her close to minimalism and process art. At this time, Zarina also began to explore the versatility of paper as an art medium. Zarina has participated in numerous exhibitions, including most recently Mind and Matter: Alternative Abstractions from 1940s to Present at the Museum of Modern Art, New York; her oeuvre was the subject of a major retrospective entitled Zarina: Paper like Skin at the Guggenheim Museum in New York in 2012..