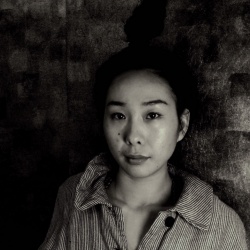 Working as a choreographer, performing artist and an independent producer, Nunu Kong develops through her work a characteristic expression playing with time and space in poetic and illusionary dimensions in both visual and dramaturgic levels with a particular sense of humor instinctively blended into her choreography. Her recent projects include Trumpet Upside Down Dancing in Air - a series of endurance performance actions where she tests her body limitations and reassesses the physics of sound by attempting to play a trumpet while suspending herself upside-down from significant height.

Nunu Kong graduated from Beijing Dance Academy. She began her choreographic career in Shanghai as one of the founders of the “Zuhe Niao” collective, which she co-founded in 2005. Following their first award wining piece Tongue’s Memory of Home at Theaterspektakel Festival in Zurich in 2006, in 2007 she established her own independent dance project “BrandNuDance” which has become one of China’s most innovative experimental performing arts exchange platforms. Promoting experimental dance as a new and vital medium in contemporary art, she has produced numerous international dance productions, commissions, workshops, lectures and presents Chinese independent performing artist’s work beyond the underground.