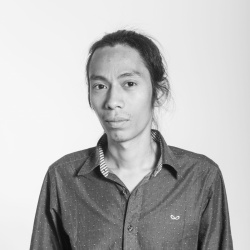 Moe Satt lives and works as a visual and performance artist in Yangon, Myanmar. Moe started creating art after graduating from East Yangon University in Myanmar with a degree in Zoology in 2005 and is part of a new generation of emerging Burmese artists.

In 2008, he founded and organized Beyond Pressure, an international festival of performance art in Myanmar. As a performance artist, Moe has performed in galleries and also on the streets of Yangon. He has been actively participating in live arts festivals in Southeast Asia and South Asia, and on the international stage. Through his travel encounters, Moe sees the differences between performance artists from both open and those from more restricted societies. While contemplating the regional landscape of performance art and on the artistic mind-set of individual countries in the region, he has developed a greater understanding of his own identity as an artist and as a person.

Moe Satt has recently participated in the 2nd CAFAM Biennale at CAFA Art Museum in Beijing, China, in 2014, and in the group exhibition “A Journal of the Plague Year” at Para Site Art Space in Hong Kong in 2013. The artist also curated the exhibition “General / Tiger / Gun” at Rebel Art Space in Bangkok, Thailand, in 2014.