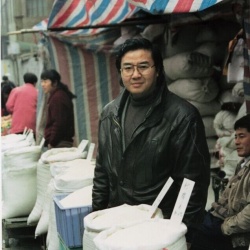 Chen Zhen was born in Shanghai, China in 1955, and died in Paris in 2000. In his home city he attended the Fine Arts and Craft School and the Drama Institute, specializing in set design. After moving to Paris, he studied at the Ecole Nationale Supérieure des Beaux-Arts and the Institut des Hautes Etudes en Arts Plastiques (where he later became a teacher) between 1986 and 1989. In the course of his career he received various international awards, and showed his work in about a hundred solo and group exhibitions around the world, becoming a prominent figure on the international art scene.

In 1990 he showed his first series of installations. From then on his artistic work dwelt entirely on three major periods of great importance for his own experience and his views on art: the Cultural Revolution, the reform of China and his engagement with the Western world. His work focuses on the relations between human beings, nature and objects; the incommunicability and lack of understanding between human beings; and finally on meditation and therapy. However, he was also interested in architecture and urbanization on a global scale.