Hu Xiaoyuan’s artistic pursuit of impeccability is exquisite enough to be practically obsessive. In her installations and paintings, the artist reinterprets the connotation of art in a more palpable way . She remains detached from dialectics about meanings and concepts, heading instead towards subtle daily experiences. Hu’s early works, such as Mine (2004),A Keepsake I Cannot Give Away (2005-2006), Those Times (2006, showcased at Kassel Documenta 12), are elaborately made from a variety of materials, including hair, old cloth, Braille, which signify abundant emotions and express personal volition. Since 2008, when she finished her Muted, Summer Solstice, and Wood series, she has consciously kept a distance from her previous style, taking up rational investigation into linguistic forms and repetitive experiments to reexamine the relations between subjects and forms. In 2010, the visual expressions in her video artworks edge toward maturity and ease, representing a more distinct style.

Born in Harbin in 1977, Hu Xiaoyuan graduated from Central Academy of Fine Arts. She was invited to several remarkable exhibits, inclusive of Mahjong - Contemporary Chinese Art from the Sigg Collection in Kunstmuseum, Switzerland; Documenta 12 in Kassel, Germany; The Ungovernables: 2012 New Museum Triennial at the New Museum, N.Y.C., U.S.A. Hu is among the most widely recognised young Chinese artists. 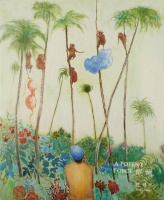