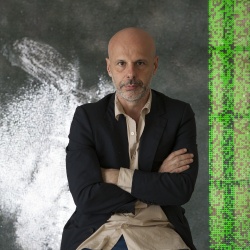 France
Lives and works in France

A key artist of his generation, Philippe Parreno radically redefined the exhibition experience by taking it as a medium, placing its construction at the heart of his process. Working in a diverse range of media including film, sculpture, drawing, and text, Parreno conceives his exhibitions as a scripted space where a series of events unfold. He seeks to transform the exhibition visit into a singular experience that plays with spatial and temporal boundaries and the sensory experience of the visitor, who is guided through the space by the orchestration of sound and image.

For the artist, the exhibition is less a total work of art than a necessary interdependence that offers an ongoing series of open possibilities.

Based in Paris, France, Parreno has exhibited and published internationally. He studied at the Ecoledes Beaux-Arts in Grenoble from 1983 - 1988 and at the Institut des Hautes Etudes en arts plastiques at the Palais de Tokyo, Paris from 1988 -1989.