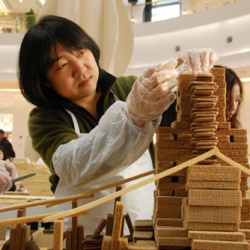 Lives and works in Beijing, China

Beijing-based Song Dong (b.1966, Beijing, China) has emerged from a strong Chinese avant-garde performing arts community and developed into a significant contemporary art figure in the progression of Chinese conceptual art. Song graduated from the fine arts department of Capital Normal University in Beijing in 1989. His work ranges from performance and video to photography and sculpture, exploring notions of impermanence and the transience of human endeavor. Song Dong and his wife Yin Xiuzhen together created a new way of collaboration: THE WAY OF CHOPSTICKS in 2001. He is also the co-founder of an artist collective “Polit-Sheer-Form Office”, which was initiated by Hong Hao, Xiao Yu, Liu Jianhua, Song Dong, and Leng Lin in 2005.

The artist was honored on various occasions including in 2012 when he won “Power 100 of Chinese Contemporary Art:  Artist of the Year” and in 2012 “The First Kiev International Biennale Award”. And in 2011 San Francisco Certificate of Honour. And in 2006 The Grand Award of The Gwanju Biennale in Korea, And in 2010 when he gained the Artron Art China (AAC) Awards as the Artist of the Year (Video and Installation). He was also recognized in 2000 as the UNESCO / ASCHBERG Bursary Laureate.