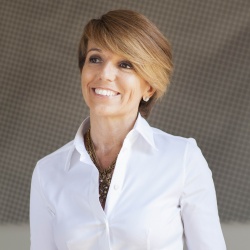 Lives and works in Turin, Italy

Among other Italian honors and awards for her work in the art world, she also received the Mont Blanc Arts Patronage Award for her dedication to contemporary art in 2003 and was awarded the title “Chevalier dans l’ordre des Arts et des Lettres” by the French Ministry of Culture in 2009.