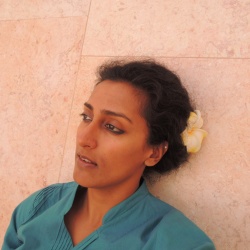 Lives and works in Mumbai, India

Sandhini Poddar is a Mumbai-based art historian and Adjunct Curator at the Solomon R. Guggenheim Museum, working on special projects in New York and Abu Dhabi. Poddar was formerly Associate Curator of Asian Art at the Guggenheim where she was responsible for global exhibitions, acquisitions, and scholarship on modern and contemporary Asian art for the Guggenheim’s international network of museums. She curated Anish Kapoor: Memory and Being Singular Plural for Deutsche Guggenheim, Berlin and the Solomon R. Guggenheim Museum, New York, organized the Guggenheim’s presentation of Zarina: Paper Like Skin, and served on the curatorial teams for the exhibitions, Cai Guo-Qiang: I Want to Believe, The Third Mind: American Artists Contemplate Asia, 1860–1989 and Lee Ufan: Marking Infinity. She was a jury member of the 2008 Hugo Boss Prize. Poddar is currently working on a seminal touring retrospective exhibition on Indian modernist painter V.S. Gaitonde, scheduled to open at the Guggenheim Museum in October 2014 and is part of the Curatorial Working Group for the Guggenheim Abu Dhabi Project, conducting research and acquisitions for the future museum. Her guest curation of Bharti Kher’s major solo exhibition at the Rockbund Art Museum in early 2014 is her first museum project in Mainland China. She writes frequently on contemporary art, philosophy, and politics for various international magazines and museum publications.