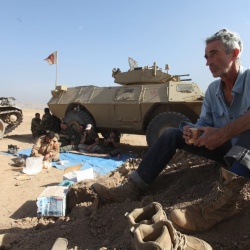 Belgium, 1959
Lives and works in Mexico

Francis Alÿs was born in Belgium in 1959 and trained as an architect before re-locating to Mexico City in 1986, where he has been based ever since. He is best known for his actions, which he documents in various ways, some merely involving the artist walking through the city. Others are epic-scale events set in dramatic landscapes bringing together hundreds of participants. Alÿs also works with painting, animation, and drawing, with many of the images he creates having a dreamlike surreal quality. His actions are frequently humorous, often transient, and can sometimes seem absurd, and yet they are always concise and carefully planned. For a long time Alÿs has been interested in spreading news about his work through unconventional means such as rumor, allowing audiences to interpret his projects in unpredictable ways. Each of these poetic qualities contributes to Alÿs' idiosyncratic way of approaching questions to do with urbanism, economics, migration, and borders. Throughout his career he has particularly investigated the processes of modernization in Mexico and Latin America.