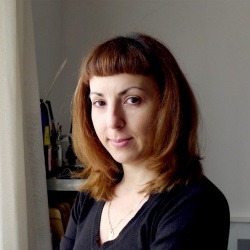 BILJANA CIRIC is an independent curator.

She was the co-curator of the 3rd Ural Industrial Biennale for Contemporary Art (Yekaterinburg, 2015), curator in residency at Kadist Art Foundation (Paris, 2015), and a research fellow at Henie Onstad Kunstsenter (Høvikodden, 2016). Her recent exhibitions include An Inquiry: Modes of Encounter presented by Times Museum, Guangzhou (2019); When the Other Meets the Other Other presented by Cultural Center Belgrade (2017); Proposals for Surrender presented by McAM in Shanghai (2016/2017); and This exhibition Will Tell You Everything About FY Art Foundations in FY Art Foundation space in Shenzhen (2017).

In 2013, Ciric initiated the seminar platform From a History of Exhibitions Towards a Future of Exhibition Making with focus on China and Southeast Asia. The assembly platform was hosted by St Paul St Gallery, AUT, New Zealand (2013), Rockbund Art Museum, Shanghai (2018), Times Museum, Guangzhou (2019). The book with the same name was published by Sternberg Press in 2019. Her research on artists organized exhibitions in Shanghai was published in the book History in Making; Shanghai: 1979-2006 published by CFCCA; and Life and Deaths of Institutional Critique, co-edited by Nikita Yingqian Cai and published by Black Dog Publishing, among others.

In 2018 she established the educational platform “What Could/Should Curating Do?”. She was nominated for the ICI Independent Vision Curatorial Award (2012). Currently she is developing a long-term project titled As you go . . . the roads under your feet, towards a new future. She is undertaking practice based PhD in Curatorial Practice at Monash University, Melbourne.