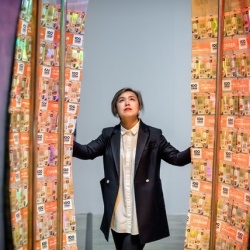 Born in 1978 in Guangzhou, Cao Fei is one of the most innovative young Chinese artists to have emerged on the international scene. Currently living in Beijing, she mixes social commentary, popular aesthetics, references to Surrealism, and documentary conventions in her films and installations. Her works reflect on the rapid and chaotic changes that are occurring in Chinese society today.

HUGO BOSS PRIZE in 2010. She received the Chinese Contemporary Art Award (CCAA) Best Young Artist Award in 2006 and Best Artist Award in 2016. She was also the recipient of Piedra de Sal Award at Cuenca Biennale in 2016.