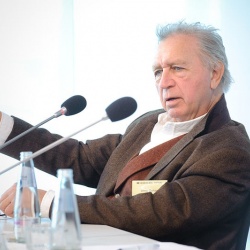 Born in Arkansas in the United States in 1940 and of Cherokee ethnicity, Durham is an artist, writer, poet, and also a political activist. His works include sculptures, paintings, writings, plays and performance art, among others.

In 1968, Durham moved to Geneva, Switzerland, where he studied at l’École des Beaux-Arts. In 1973, he returned to the US to take part in the “American Indian Movement” (AIM). From 1973 to 1980, Durham devoted his energies to AIM, even becoming an American representative to the International Indian Treaty Council. Only when AIM fragmented did Durham return to New York to devote himself once again to art. As an artist with an in-depth understanding of Native American life, Durham challenges the conventional understanding and depiction of Native Americans in his works. In 2005, Durham curated The American West which punctured the mythology of cowboys and Indians.

In 1987, Durham moved to Cuernavaca, Mexico. During this time, Durham exhibited widely, including at the Whitney Biennial, Documenta, Institute of Contemporary Arts, London, Art Basel, and elsewhere. Later, he moved again to Europe. At this time he started frequently to use stone in his works—an anti-traditional, anti-monumental move of his. As an international artist, Durham does not like to form set ideas about things but rather prefers to openly await the coming of all kinds of possibilities. He is a skeptic who tries to question pre-existing understanding and knowledge. He has furthermore published extensively in Art Forum, Art Journal, and other art magazines.

Jimmie Durham's oeuvre defies the modern concept of autonomy, as well as language as meaning and power generating system. His works have a strong "do it yourself" aesthetics and refer to some kind of untrammeled thought and native arts, but defy at the same time ethnographic conventions with a twinkling eye.