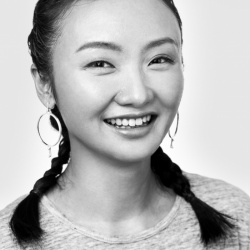 Guan Xiao works with multiple media including video and sculpture. She received her BA in Directing at the Communication University of China in 2006 and is known for juxtaposing the past and future, primitive and classical, crude and high-tech and combining the various elements into a distinct and unique formal aesthetic. She practices from the standpoint that the internet’s openness provides a kind of flat surface on which to work, with a lack of hierarchy in the contemporary visual world.

Guan participated in the 2015 New Museum Triennial “Surround Audience” at the New Museum in New York, her other recent group exhibitions include “Don’t You Know Who I Am? Art After Identity Politics” at Museum Van Hedendaagse Kunst Antwerpen in Antwerpen, Belgium and “Degeneration” at OCT Contemporary Art Terminal (OCAT), Shanghai, China in 2014. Her work also features in the book The Future Will Be…China by Hans Ulrich Obrist.